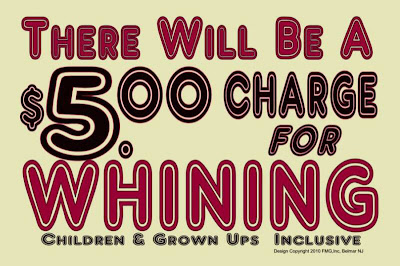 I hate the whiny voice. Hate it.

In the states, the "whining" scenario usually goes something like this:

The kid in the back seat sticks out his bottom lip, puts on his doe eyes, and pitches his voice up a few octaves: "Daaaad. Are we there yeeeet? I'm huuuungry and I need to peeee." He oozes pathetic.

"Junior, if you don't stop whining, you're not going to watch any TV when we get to Grandma's house!"

Of course, what Junior doesn't realize, is that if he had asked in a normal, respectful tone, Dad might have answered him nicely. So he'll learn, eventually, that whining doesn't get you what you want. Big boys don't whine. (They cry, but don't whine.)

And so I've rarely heard a kid over the age of twelve use the whiny voice.


Except here. Where whining is a social art:

And I don't just mean the complaining, people. Everyone does that. We use them as synonyms sometimes. I mean the voice, the face, the works. They use it when they want something from you.

You think I exaggerate? Ha! I've heard Peruvian adults use the whiny voice a thousand times! Okay that may be an exaggeration. Is this a Latin American thing? A Peruvian thing? A Limeno thing?

If I'm being all Abe Lincoln here, most of the time it still irritates the heck out of me. To my United Statsian ears it feels ingratiating, begging, manipulating, childish.

And the thing is, in an objective way, I know Peruvians really mean for it to be polite. It's a social courtesy, a nicety. It demonstrates that they know they're putting you out. It's the equivalent of "I'm sorry to ask you this, but..."

AND YET, I still feel like saying "Stop whining, or I'll turn this car around!"

There's only so far the brain can take you in intercultural interaction.


Confession: I have, however, used the whiny voice myself a time or two. Followed by deep shame.

Dani
Boston, MA, United States
...a part of all that I have met; Yet all experience is an arch wherethrough Gleams that untraveled world whose margin fades Forever and forever when I move. How dull it is to pause, to make an end. To rust unburnished, not to shine in use! As though to breathe were life!